At WegoWise we use extensive code review feedback to iteratively improve code. I want to describe how Git fits into this process, because this is probably the biggest change I had to make to my preexisting workflow when I came on board. Basically I had to relearn how to use Git. The new way of using it (that is, it was new to me) is extremely powerful and in a strange way extremely satisfying, but it does take a while to get used to.

I would describe my old approach and understanding as ”subversion, but with better merging” 1 . I was also aware of the concept of rebasing from having submitted a pull request to an open source project at one point, but I didn’t use it very often for reasons I’ll discuss later. As it turns out understanding git rebase is the key to learning how to use Git as more than a ‘better subversion’.

For those who aren’t familiar with this command, git rebase <branch> takes the commits that are unique to your branch and places them “on top” of another branch. You typically want to do this with master, so that all your commits for your feature branch will appear together as the most recent commits when the feature branch is merged into master.

Here’s a short demonstration. Let’s say this is your feature branch, which you’ve been developing while other unrelated commits are being added to master:

If you merge without rebasing you’ll end up with a history like this: 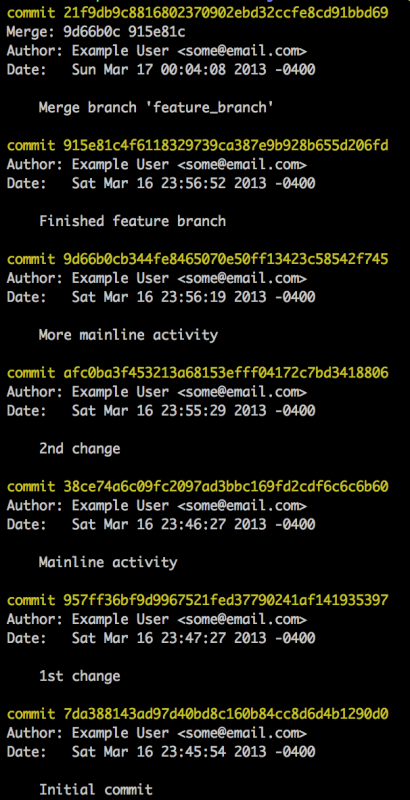 Here is the process with rebasing:

This results in a clean history: 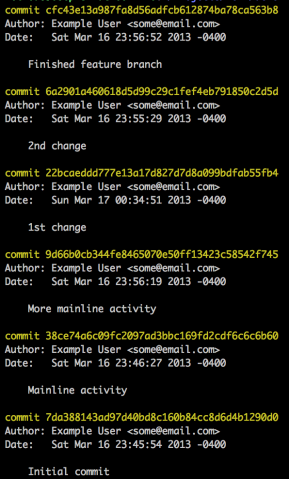 Another benefit of having done a rebase before merging is that there’s no need for an explicit merge commit like you see at the top of the original history. This is because — and this is a key insight — the feature branch is exactly like the master branch but with more commits added on. In other words, when you merge it’s as though you had never branched in the first place. Because Git doesn’t have to ‘think’ about what it’s doing when it merges a rebased branch it performs what is called a fast forward. In this case it moved the HEAD from 899bdb2 (More mainline activity) to 5b475e (Finished feature branch).

The above is the basic use case for git rebase. It’s a nice feature that keeps your commit history clean. The greater significance of git rebase is the way it makes you think about your commits, especially as you start to use the interactive rebase features discussed below.

When you call git rebase with the interactive flag, e.g. git rebase -i master, git will open up a text file that you can edit to achieve certain effects: 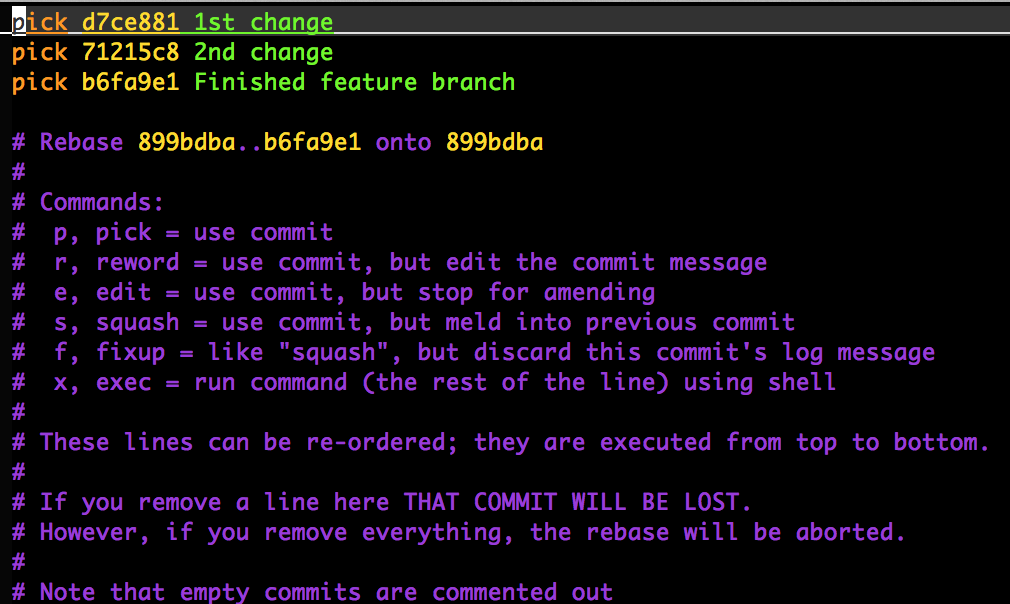 As you can see there are several options besides just performing the rebase operation described above. Delete a line and you are telling Git to disappear that commit from your branch’s history. Change the order of the commit lines and you are asking Git to attempt to reorder the commits themselves. Change the word pick to squash and Git will squash that commit together with the commit on the preceding line. Most importantly, change the word pick to edit and Git will drop you just after the selected ref number.

I think of these abilities as time travel. They enable you to go back in the history of your branch and make code changes as well as reorganize code into different configuration of commits.

Let’s say you have a branch with several commits. When you started the branch out you thought you understood the feature well and created a bunch of code to implement it. When you opened up the pull request the first feedback you received was that the code should have tests, so you added another commit with the tests. The next round of feedback suggested that the implementation could benefit from a new requirement, so you added new code and tests in a third commit. Finally, you received feedback about the underlying software design that required you to create some new classes and rename some methods. So now you have 4 commits with commit messages like this: 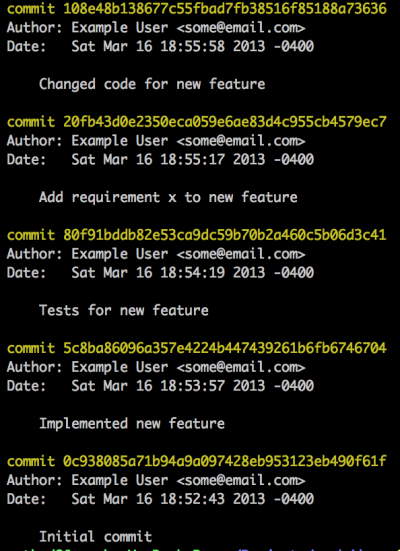 To get rid of the tests commit all you have to do is squash commit 2 into commit 1 (by entering interactive rebase and changing the word pick on the second commit to squash or just s3), resulting in:

It’s just that easy! But seriously, let’s go through each command to understand what’s happening.

This is the basic procedure for revising your git history (at least the way I do it). There are a couple of other tricks that I’m not going to go into detail about here, but I’ll leave some hints. Let’s say the changes for the feature and the new requirement were both on the same file. Then you would need to use git add --patch file1.rb before step 2. What if you wanted to introduce a completely new commit after commit 1? Then you would use interactive rebase to travel to commit 1 and then add your commits as normal, and then run git rebase --continue to have the new commits inserted into the history.

One of the reasons I wasn’t used to this workflow before this job was because I thought rebasing was only useful for the narrow case of making sure that the branch commits are grouped together after a merge to master. My understanding was that other kinds of history revision were to be avoided because of the problems that they cause for collaborators who pull from your public repos. I don’t remember the specific blog post or mailing list message but I took away the message that once you’ve pushed something to a public repo (as opposed to what’s on your local machine) you are no longer able to touch that history.

Yes and no. Rebasing and changing the history of a branch that others are pulling from can cause a lot of problems. Basically any time you amend a commit message, change the order of a commit or alter a commit you actually create a new object with a new sha reference. If someone else naively pulls from your branch after having pulled the pre-revised-history they will get a weird set of duplicate code changes and things will get worse from there. In general if other people are pulling from your public (remote) repository you should not change the history out from under them without telling them. Linus’ guidelines about rebasing here are generally applicable.

On the other hand, in many Git workflows it’s not normal for other people to be pulling from your feature branch and if they are they shouldn’t be that surprised if the history changes. In the Github-style workflow you will typically develop a feature branch on your personal repository and then submit that branch as a pull request to the canonical repository. You would probably be rebasing your branch on the canonical repository’s master anyway. In that sense even though your branch is public it’s not really intended for public consumption. If you have a collaborator on your branch you would just shoot them a message when you rebase and they would do a “hard reset” on their branch (sync their history to yours) using git reset --hard remote_repo/feature_branch. In practice, in my limited experience with a particular kind of workflow, it’s really not that big a deal.

Some people are wary of rebase because it really does alter history. If you remove a commit you won’t see a note in the commit history that so and so removed that commit. The commit just disappears. Rebase seems like a really good way to destroy yours and other people’s work. In fact you can’t actually screw up too badly using rebase because every Git repository keeps a log of the changes that have been made to the repository’s history called the reflog. Using git reflog you can always back out misguided recent history changes by returning to a point before you made the changes.

Hope this was helpful!

Note: a different version of this post was posted on the author's blog Stupid Idea.